How does acupuncture work? 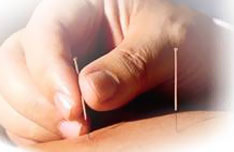 The practice of acupuncture  is based on the theory of meridians. According to this theory, qi (vital energy) and blood circulate in the body through a system of channels called meridians, connecting internal organs with external organs or tissues. By stimulating certain points of the body surface reached by meridians through needling, the flow of qi and blood can be regulated and diseases are thus treated. These stimulation points are called acupuncture points, or acupoints.

There are 12 pairs of regular meridians that are systematically distributed over both sides of the body, and two major extra meridians running along the midlines of the abdomen and back. Along these meridians more than three hundred acupoints are identified, each having its own therapeutic action. For example, the point Hegu (LI 4), located between the first and second metacarpal bones, can reduce pain in the head and mouth. The point Shenmen (HT 7), located on the medial end of the transverse crease of the wrist, can induce tranquilization.

The acupuncturist first selects appropriate acupoints along different meridians based on identified health problems. Then very fine and thin needles are inserted into these acupoints. The needles are made of stainless steel and vary in length from half an inch to 3 inches. The choice of needle is usually determined by the location of the acupoint and the effects being sought. Once the point is correctly located and the required depth reached, the patient will usually experience a feeling of soreness, heaviness, numbness and distention. The manipulator will simultaneously feel that the needle is tightened.

During your 1 hour appointment the needles are usually left in situ for 15-30 minutes. During this time the needles may be manipulated to achieve the effect of tonifying the qi. Needle manipulations are generally involved with lifting, thrusting, twisting and rotating, according to treatment specifications for the health problem. Needling may also be activated by electrical stimulation, a procedure usually called electro-acupuncture, in which manipulations are attained through varying frequencies and voltages.

Treatment protocols, frequency and duration are a matter of professional judgment of the practitioner, in consultation with the patient. A common course of treatment may initially involve between ten and fifteen treatments spaced at approximately weekly intervals, and spread out to monthly later in a program.

We are open and following all guidelines put forth by the health authorities. Check our social media channels for more info: